The night of the presidential debate started out innocuously enough on Twitter. Joe Biden’s official account shared a viral photo of Apple EarPods and a pint of Jeni’s ice cream – dubbed the candidate’s “ear piece and performance enhancers” in a riff on right-wing conspiracy theories that he would need more aggressive forms of both to get through the event.

But minutes after the debate began, any semblance of formal structure devolved into cross-talk and shouting. FOX News’ Chris Wallace, the moderator, was unable to wrest back control, at one point pleading with Trump to abide by the agreed upon terms of the debate and to not interrupt Biden during his allotted two minutes to respond to each question.

It was difficult to tease out many complete sentences, let alone fully constructed policy ideas from either candidate under these conditions.

Twitter was already busy talking about both candidates heading into the event, according to the Ipsos Elections Debate Tracker. Initially, overall sentiment about both Biden and Trump online was highly positive, but shortly after the debate began, Twitter turned on both Biden and Trump. Sentiment for both dropped from net positive territory (more than 50 on the net sentiment scale) to net negative (less than 50). After the event concluded, Biden managed to resuscitate greater positivity, trending towards net neutral in terms of sentiment. 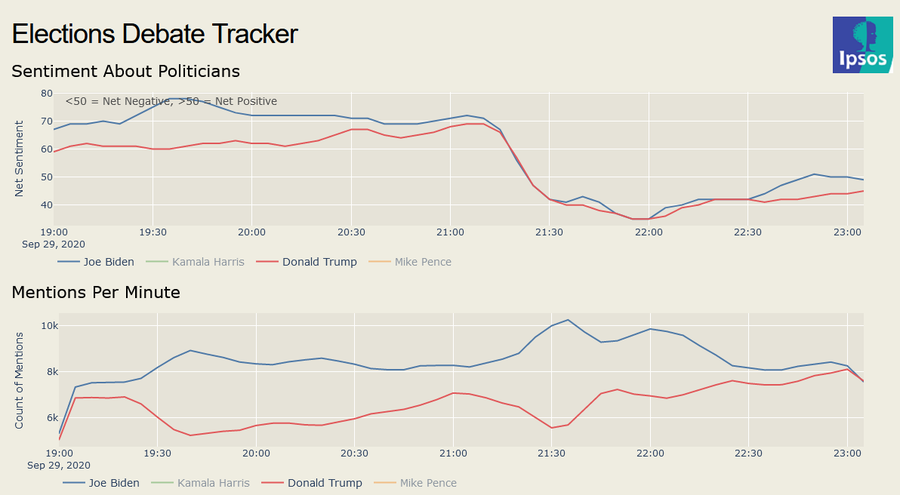 A slight Biden advantage is also reflected in post-debate polling Ipsos conducted with FiveThirtyEight. In post-debate evaluations, Biden fared much better relative to Trump, with 60% of Americans agreeing that his debate performance was “somewhat” or “very good.” Just 33% said the same of Trump. Views here fell along partisan lines, with 87% of Democrats viewing Biden’s performance favorably, and 68% of Republicans viewing Trump’s performance favorably.

While Biden may have “won” the debate, so to speak, the information war on Twitter may have favored Trump more. Articles with a negative slant on Biden were already being shared broadly as the debate kicked into gear, according to our Elections Debate tracker analysis of the top URLs associated with the conversation about the debate online.

Top URLs circulating around the 9pm mark included a Politico article criticizing the Obama administration’s alleged failures in containing the H1N1 epidemic, as well as a 2019 opinion piece from USA Today defending Trump’s remarks after a 2017 clash between white supremacists and counter-protesters in Charlottesville that “there were very fine people on both sides.” Another widely circulated Washington Times piece resuscitated questions about Biden’s alleged harassment of Tara Reade.

Trump’s accusations during the debate that Biden’s son Hunter had profited from his father’s global political connections also made its mark on Twitter, with a Newsweek article reporting on Republican claims that Hunter had received $3.5 million from the widow of the former mayor of Moscow rising to the top urls.

Though the debate might have ended, conversation about it on Twitter has not. Misinformation and conspiracy theories were proliferating online the morning after. Amid this hodgepodge of disinformation and attacks on the Biden family a focus on Antifa stands out.

As just one example, a Panama-registered domain titled “antifa.com” that is set up to link directly to the official Biden campaign website made it into the top urls this morning. It appears to be furthering speculation among some Twitter users that Biden has ties with the organization – a concept Trump has long sought to promote.

But, Twitter feedback has not been all bad for Biden. During the debate, Mike Reese, Multnomah County Sheriff, shot back after Trump claimed that the “Portland Sheriff” supported him. In a statement that quickly went viral, Reese said, “In tonight’s presidential debate the President said the ‘Portland Sheriff’ supports him.  As the Multnomah County Sheriff I have never supported Donald Trump and will never support him.” And, Team Biden capitalized on one of the few audible moments of the night, emblazoning Biden’s admonition to Trump, “Will you shut up, man,” on a t-shirt that also went viral.

As the slew of post-debate misinformation underscores, Americans continue to operate in different versions of reality when it comes to views on the presidential race. Much like in 2016, conspiracy theories are thriving in the digital space. Though the horse race polls and views on the two main candidates is holding steady, we cannot discount the threads of disinformation circulating online and its possible future effects on the outcome of the 2020 election.