Across all countries in the study, the percentage of people who think things are going in the right direction in their country has dropped 2% since last month to 37%. 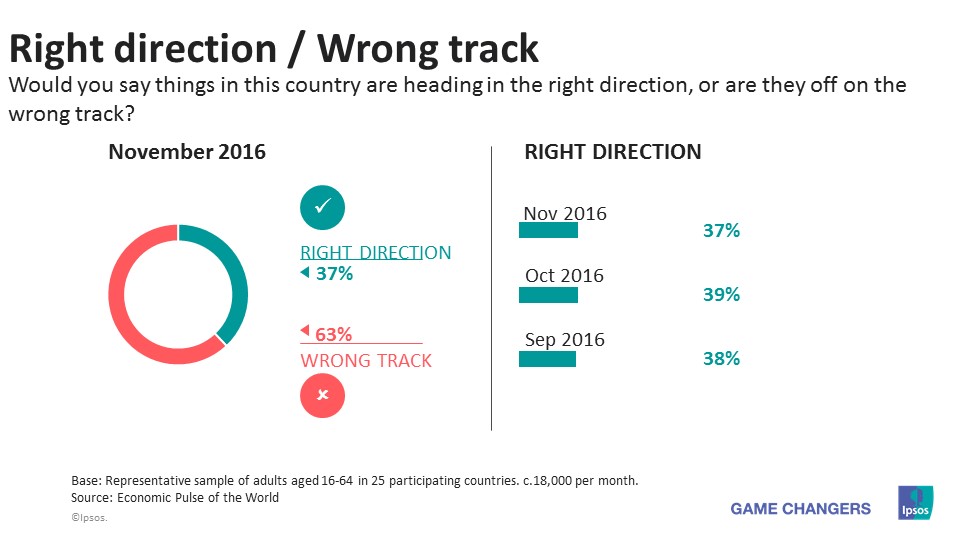 The study also shows countries in the BRIC and APAC regions tend to be the most optimistic. China is the single most optimistic country, with 90% saying things are headed in the right direction.

What worries the world

When looking at the issues which drive this sentiment in the 25 countries, the number one worry this month is again employment – (38% across all countries say this worries them) but this has been slowly declining since the study started in 2010, when it was 51%. Spain is the country most worried about unemployment (70%), with Italy close behind (65%.)

Poverty and Social Equality (34%) is the issue people most worry about next – Hungary (56%) and Russia (52%) are the countries most worried – it’s also the single issue which most worries Russians and Germans.

Financial and political corruption is the third most common worry of the world (30%). South Korea is the most worried about this, and indeed about any issue out of any country in the study – a huge 73% are worried about this. The number of people in South Korea saying they worry about corruption has been growing since June but has spiked dramatically, with a 19 percentage point rise month on month, as the corruption scandal surrounding president Park Geun-hye reached fever pitch.

In South and Central America, crime and violence is the dominant issue. Peru is the most worried (71%), followed by Mexico (67%) and Argentina (63%). Turkey is once again the country most worried about terrorism (66%) and Hungarians are by far the most concerned about healthcare (63%). 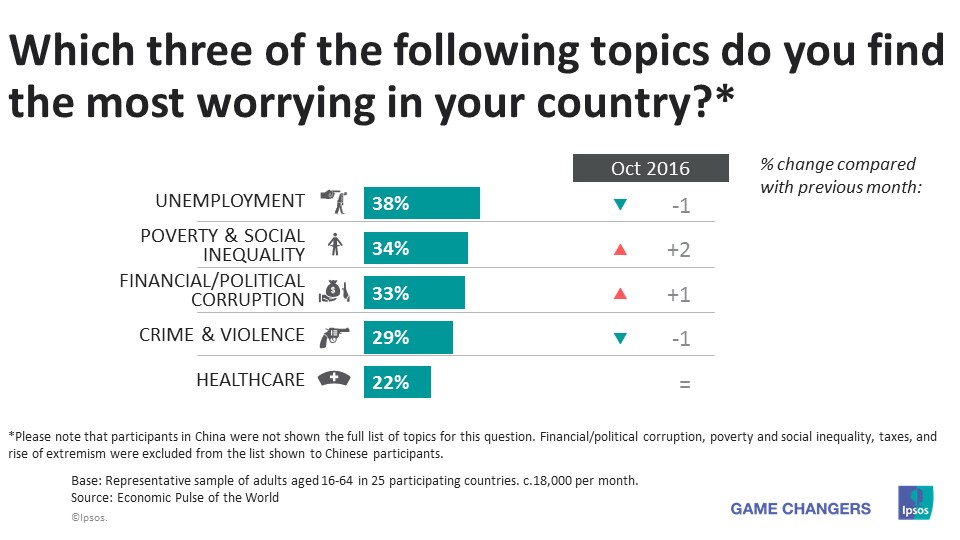 Looking at the findings split by gender, the research finds men are more optimistic than women that things in their country are going well. The biggest confidence gaps between men and women are in the US, Israel and Russia. The only countries to buck the trend are Poland, Saudi Arabia and Canada. It also shows that men and women in each country tend to worry about the same things, but where concerns differ, it’s usually because women are more likely to worry about healthcare.